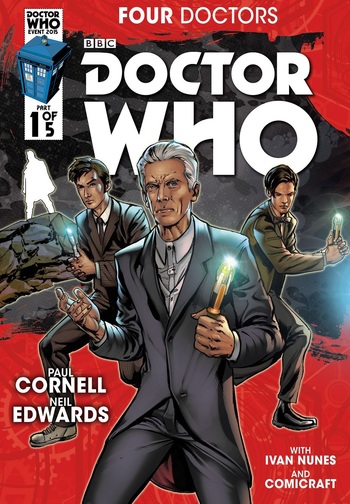 "We're all going to have some sort of 'Multi-Doctor... Event!' Whether you like it or not!"
— The Twelfth Doctor
Advertisement:

Four Doctors is a Titan Comics Doctor Who mini-series, featuring the Tenth, Eleventh, Twelfth, and War Doctors. The series was written by Paul Cornell and drawn by Neil Edwards. It was published in 2015 as a celebration of the tenth anniversary of the revival of Doctor Who as a TV series.

The Tenth Doctor and Gabby, the Eleventh Doctor and Alice, and the Twelfth Doctor and Clara have all arrived in early-twenty-first-century Paris, in what appears to be a coincidence. But when Clara mysteriously gathers all the companions together to ensure that the three Doctors must never meet, fate seems determined to foil her hopes. Who are the villains behind it all?

The Four Doctors miniseries include the following tropes: