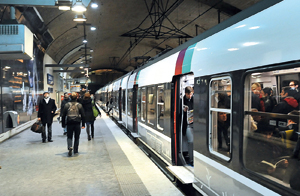 Not so famous about Paris is its incredible mass transit system, whose organization is so complex it can be daunting to the foreigner.

The subway system, formerly known as the Transit Métropolitain, "Metropolitan Transit" — later shortened to Métro de Paris and thus becoming the namer of so many other underground rail systems — is world-famous for the Art Nouveau architecture of many of its stations, most of them built between 1900 and 1920, as well as for being one of the busiest and densest in the world: 14 main lines with 4 more planned and 2 auxiliary lines (3bis and 7bis) crisscrossing downtown Paris for a total of 214 kilometers (376, including future lines). Lines 1 and 14 are totally automated (remote-controlled, in reality). The Châtelet-Les Halles station, which serves a grand total of eight lines (Subway 1, 4, 7, 11, 14, and RER A, B and D), is the largest and busiest subway station of the world. The passageways connecting between lines at transfer stations tend to be long, tortuous and in many instances one-way. The tickets for the metro are very, very tiny. Five of the system's lines (1, 4, 6, 11 and 14) are equipped with rubber-tired trains; Lines 1, 4, 6, and 11 were originally steel-wheeled until the 1960s and 1970s but Line 14 was built new in the 1990s with the rubber-tired system.

Then, you have the RER, Réseau Express Régional, "Regional Express Network", which is a network of rail underground within Paris and ground-level outside of Paris, which serves the entire region of Île-de-France — sort of like a faster subway. It is operated jointly by RATP, Paris's transit authority, and SNCF, France's national rail company; the difference is largely irrelevant as the transition between RATP and SNCF sections is seamless, and only matters when the RATP or the SNCF are on strike. (Also, at RER stations you also have to go through a ticket barrier on your way out). Unlike the Métro, the RER runs on normal train cars moving through standard railroads, as it was initially planned to use the existing railroads of Île-de-France. While not as iconic as the Métro, the RER more than makes up for it for its incredible size: a total of 587 km of railroad, serving 257 stations.

In addition, there is the Transilien note Intended to rhyme with Francilien, the term for residents of Île-de-France network, run by SNCF, which operates 8 shorter lines (H, J, K, L, N, P, R and U) around Île-de-France and uses the RER's fare system. (Fun (?) fact: RER C is known as Réseau Escargot Régional (Regional Snail Network) because its length and its many branches mean even small delays will result in at least one big cascaded delay, whereas RER D line is popularly known as "RER Trash" due to its high rate of accidents and disturbances). The frequent delays due to malfunctions, incidents with users and the occasionnal strike (in 2007, the biggest strike led some people to become stuck in the middle of their trip or at work since you could wait up to four hours between two trains, if they did not decide to just stop) gives the RATP (Régie Autonome des Transports Parisiens - Autonomous Office of Parisian Transports) nicknames such as Reste Assis T'es Payé (Keep your seat, you're paid), Rentre Avec Tes Pieds (Go home on foot) or Râle Autant que Tu Peux (Complain as much as you can).

One of the main characteristics of the RER/Transilien network is its named routes. Due to the lines' length and their many branches, there are many different routes and service types a given train can take, and in order to reduce confusion, the routes (called "missions") are named with a four letter mission code. There are two naming schemes: RATP's scheme, used on RER A, B and C, and SNCF's scheme used on RER D and E as well as all Transilien lines:

The Bus system is similarly divided in two: the RATP lines, which run around downtown Paris, and several lines operated by city or departemental councils, which provide transportation within Île-de-France. Of note is the night bus, which passes at 30 minute intervals when the last regular busses stop passing, previously known as Noctambus back when it only served downtown Paris, now renamed Noctilien because it now reaches out to Île-de-France.

The advantages of this complex network are two:

1. The entirety of Île-de-France can be easily covered without using a private car even by people who are totally foreign to the country and who speak only a few words of French. Due to the rather complex and crowded road network, the usual advantage of having a car, freedom of movement, is annihilated: one has to know in advance where to go, where to park, where are road tolls to be paid, how to avoid the rush hours and so on. It may be complicated even for a native, a foreign visitor may be totally lost.

2. Central Paris has extremely expensive (and, unfortunately, for cramped spaces which are definitely not up to price) housing costs and rents, therefore the large population which works there would rather commute to work from cheaper and less crowded places. With millions of daily commuters, travel by car or bus quickly becomes impractical.

Also of note is the terrible snarl that is the fare system:

The bad part? You'd better understand and know by rote the entire fare system, because if you screw up (for example, you have a ticket for zones 1-5 and you're in zone 6), you have to pay a fine of 86 €, or in US money, $96!

And the worst part? Since this fines-abuse is VERY widespread (all those people you see peeking around the doors into the station are people who skipped the turnstiles and are scouting for railroad cops) the transit lines are often patrolled with railroad cops backed up by the police and the military in some cases asking for tickets.

Now that you've read all of that, here's a map

of the whole damn thing.