"Oh look. It's us, again. Yes, like a bad case of glandular fever Only Connect is back. Our connections are still so obtuse you could put them in a railway station and call them a help desk. Our wall still as messed up as a sensitive teenage lover dumped in public. And our final round still has as many missing vowels as the text messages they send pleading to be taken back."
—Victoria Coren Mitchell, introducing Series 8
Advertisement: 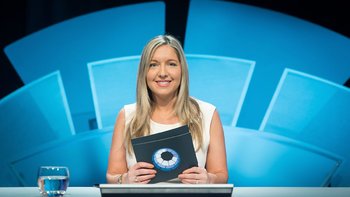 "Now please choose an Egyptian hieroglyph."
Only Connect (2008-) is a BBC Game Show hosted by Victoria Coren Mitchell. Two teams of three players, who come up with a team name based on their common link, must figure out what connects four apparently random clues. The quiz is unapologetically difficult and tests both knowledge and lateral thinking, each to a high standard. Teams compete throughout the each series in a tournament set up, with recent series taking a cue from University Challenge to have a double-knockout tournament, the complexities of which confuse Victoria from time to time. The quiz is split up into the following rounds:

"What's the connection between these tropes? Here's the first":

"Thank you for watching. If you enjoyed it, please join us again; or, if you prefer something a little easier to work out, try the Arab-Israeli conflict."