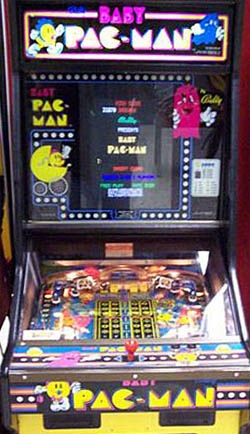 Baby Pac-Man is a Pac-Man arcade game designed by Claude Fernandez and released by Bally in 1982. It is best known for being one of two Pinball/Video Game hybrids developed by Bally (Granny and the Gators was the other). Instead of a regular pinball machine, the game shipped in an arcade cabinet, with a video screen on top with a smaller-sized table beneath.

Like other Pac-Man titles, the game starts off with Baby Pac-Man in a maze with four ghosts; unlike other titles, there are no power pellets available. When the player moves Baby Pac-Man into one of two chutes at the bottom of the maze, the gameplay switches over to the pinball table. Doing well at pinball rewards the player with power pellets, higher-scoring fruit, faster movement through the warp tunnel, and extra lives. The gameplay would return to the screen if the player shot the ball into a saucer or drained it, but draining would close the vertical chutes to lock Baby Pac-Man out of the pinball table. There were three mazes available, but most players found it hard to finish even the first one. That did not deter arcade operators, and Baby Pac-Man ended up as the second-bestselling pinball game of the year.note Right behind Mr. & Mrs. Pac-Man Pinball

By most accounts, Baby Pac-Man is the hardest Pac-Man game ever made. Not only does the player start off with no offensive capabilities, but power pellets must be earned either by hitting a single target seven times or hitting two inner targets hard enough to move a secondary ball across a ramp. Skillful pinball playing helped ease things along, but the small size of the pinball table made it fairly easily to drain the ball. Yet by far the most frustrating aspect of the game is the disregard for the rules of ghost movement established in earlier Pac-Man titles — the ghosts are more aggressive than in the other Pac-games, with the red one moving significantly faster than the player does, and all of them can reverse direction at any time.

Because of the very unorthodox setup of the game, on top of Namco terminating their licenses with Bally/Midway, Baby Pac-Man never received a home console port that aimed to replicate the dual video-pinball gameplay of the original game. It wouldn't be until 36 years later when Bob DeCrescenzo, aka PacManPlus, an icon in the Pac-Man homebrew scene for Atari's systems announced that a full port of Baby Pac-Man had begun development on the Atari 7800, releasing in 2019.