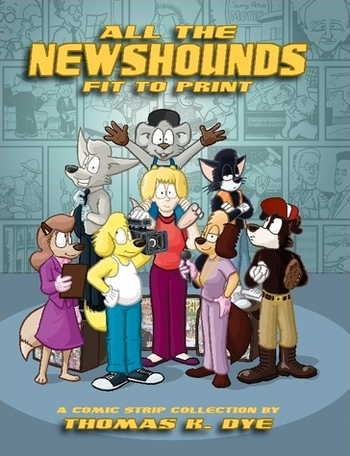 and its continuing series Newshounds II are a long-running Furry Web Comic by Thomas K. Dye (the author of, among other things, Something Happens). It's about a human woman, Lorna, and the six (originally four) dogs, one cat and one rat she has adopted and employed to work in television news. The original strip lasted from November, 1997 to December, 2006. The continuation started in July, 2007 and ended on September 29th, 2014. Rebooted as Newshounds Remastered in March 2016.

In the original Newshounds comic strip run, the team ran KPET, a television channel operating out of Lorna's home.

In Newshounds II, the comic developed a more page-oriented layout, with the entire team moving on to Mega News West to moderate video blogs as they slowly work to build lives of their own.

Newshounds has the following tropes:

Policeman: All right, Mr. Spleen, don't hurt anybody in there. Just tell us your demands.
Mr. Spleen: I want someone to run over Michael Bolton with a steamroller!
Policeman: (Beat) (into bullhorn) WHAT'S THE CATCH?