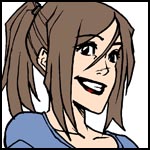 Hot and Socially Inept.
Lyla: ...You're so shy, Jess.
Jess: So?
Lyla: So If this keeps up, the only way you can get close to him is to open a comic book store of your own.
Jess' face lights up with joy
Lyla: Jess? I was just kidding!
Advertisement:

is a serial slice-of-life webcomic by Remy "Eisu" Mokhtar, based around Jess, her friends, and her new comic book store. Jess, the main character, is a clumsy comic book nerd who grew up with very good looks. Her nerd tendencies have a habit of overriding her confidence in her image, however — so much so that she started her own comic book store just to lure a cute guy into talking to her. This actually manages to work, sort of.

The comic follows the life and times of her best friends Lyla, her brother, four nerd friends, Cute Comic Guy, and Mel. And Maureen.

Despite their importance to the plot, none of the male characters has a name, whereas all the female characters are named. Word Of God says their names will probably never be given because the comic is based on a female perspective on nerd fandom.