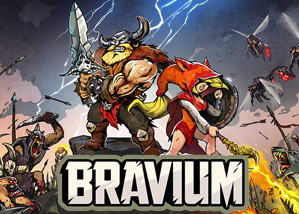 Our Heroes, alone against the hordes of evil
Advertisement:

Bravium is a Hero Defense videogame for PC and Android, downloadable for free and developed by In Game.

The game itself is pretty straight-forward: you play as a massive viking swordsman (and later a mysterious sorceress), fighting your way through a series of levels where he/she has to defeat a horde of monstrous enemies of various skills, as well as destroying the two towers present on each level. Destroying the towers net and surviving the stage net you a star, which can be used to purchase skills that improve the heroes' skills. Completing optional objectives or levels will reward you by unlocking new skills, weapons and trinkets, vastily improving your arsenal of weapons and spells, allowing you to face the enemies in many different ways, mixing and matching weapons and spells to lay waste on the foes.

The plot is rather simple: the awakening of a monstrous Dragon in a remote, god-forsaken land has stirred hordes of monsters, which are threatening the villages, as mysterious "towers" are plagueing the landscape. The heroic Barbarian sets sail with his magic Drakkar, gathering a small following of companions, including the Wizard, and a veritable arsenal of spells, weapons and amulets in order to destroy these hordes of monsters and become true heroes.