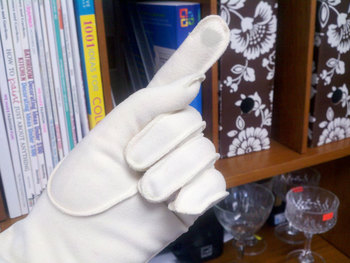 White gloves being used to test the thoroughness of a cleaning job. If you run your finger across the mantelpiece, shelf, or back of a chair and if it comes back clean, you know a good job was done. Truth in Television (the basic motion, with or without the gloves).

This doesn't require gloves. A cloth will do. Yet old money characters will use their High-Class Gloves for this.