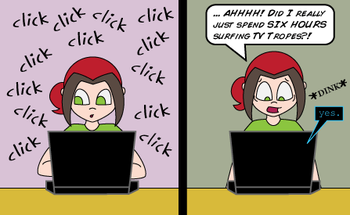 Penny is subjected to all of the most dangerous pitfalls of nerd-dom.
Enjuhneer

is a slice of life comedic webcomic drawn by Jenny Blanchard. It is set in the fictional school of Enjuhneer Institute of Technology which is based off of the actual college Rensselaer Polytechnic Institute. The author attended RPI and so many of the characters and places draw inspiration from the campus itself as well as from the people the author knew while there.
Advertisement:

The main character, Penny, enters EIT as a freshman and quickly finds herself in the middle of nerd culture. She meets a wide variety of characters, including a non-militant hardcore femenist, an invisible roommate, LARPers, and a guy who sneaks into the room just to play video games. Overall the cast is about what you'd expect from a nerd culture at a tech school. The comic is generally gag-a-day with occasional multi-strip arcs and a few asides where the author talks about things happening in her real life. The strip updates Mondays, Wednesdays, and Fridays.

The author actually created a (kind of) fully functional website for the school, complete with course listings, which can be viewed here

A character sheet is now in progress, please add to it

As of 26 July 2014, after a hiatus beginning on 10 March of that year, the author put up a comic explaining that many things around her personal life had changed and that she wondered whether to continue the comic in the original direction. As of 26 July 2016, the domain has expired, but you can still try your luck with the Wayback Machine.