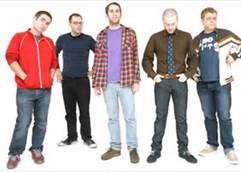 Olde English Comedy is a website dedicated to the work of New York based comedy troupe Olde English. They have been performing since 2002, and in that time have made over one hundred and fifty short videos. Its line-up has changed over the years, but as of 2008, the core members of the group were Ben Popik, Raphael Bob-Waksberg, David Segal, Caleb Bark, and Adam Conover. It can be found here.

Their last big project together, a film called The Exquisite Corpse Project—which is a combination of a goodbye documentary and a movie written in exquisite corpse style—has been aired in select theaters, and info relating to it can be found on their blog

and their Facebook page. As of December 2013, the movie is available on DVD and Blu-Ray, and as a paid download.

Tropes that appear in the works: