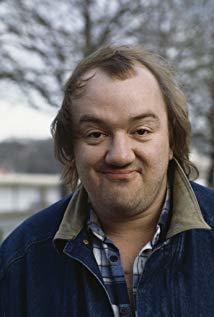 "It's a pragmatist's business, comedy. Start off with good intentions and references to the Pompidou Centre and you end up with boiled sweets and a pantomime cow."
Advertisement:

Melvin Kenneth Smith (3 December 1952- 19 July 2013) was an English actor, comedian, writer and director. He co-starred in the BBC sketch comedy shows Not the Nine O'Clock News and Alas Smith and Jones. He also co-wrote and starred in the sci-fi comedy Morons from Outer Space. His directorial efforts include The Tall Guy, The Radioland Murders and Bean (which starred his friend and frequent collaborator Rowan Atkinson). To film buffs, his most memorable role is likely the Albino in The Princess Bride.