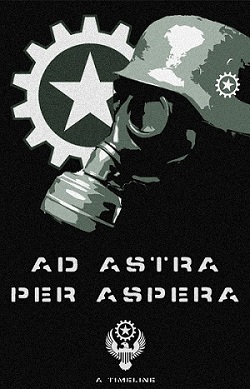 Once again, the sons and daughters of Terra march to war.
Feeling cheerful? Read Ad Astra Per Aspera and lose a little bit more faith in humanity!
Advertisement:

Written by rvbomally (but with plenty of contributions from other members), Ad Astra Per Aspera

is one of the most developed and best-received timelines on AlternateHistory.com, despite only having started back in 2011. A Grimdark setting best described as 1984 IN SPACE!, or as the author himself commented, a Cold War-themed Warhammer 40,000. Three galactic dictatorships lord over four trillion souls, galactic war is the status quo, democracy is virtually extinct, and a dozen conquered alien races are used as either slaves or cannon fodder.

A detailed galactic map can be found here.

The point of divergence is 1868, when President Andrew Johnson was successfully impeached by Benjamin Wade, who became his successor. The Wade-Davis Bill was passed, leading to heightened tensions between Northern and Southern states, as well as increased militarization. World War I and World War II destroyed the British and French empires, leading to a tripolar world with the United States, the German Empire, and the Soviet Union as the superpowers. When an American president was assassinated in 1965, the increasingly totalitarian US was remade into the expansionist American Empire. As the three empires expand into space with the advent of FTL travel, an apocalyptic nuclear war occurred on Earth in 2239. Offworld colonists are cut off from their Earth-based governments and each other, sparking a period of galactic anarchy known as the Collapse.

Eventually, three interstellar superpowers emerged from the ashes. The Coalition of Western Republics, the Christian objectivist successor of the American and German Empires, wage constant war to impose Manifest Destiny across the galaxy. The Conseil of Workers' Systems, a communist state that worship its leader as a living god, wage constant war with the capitalist Coalition. The United Technocracies of Man, a textbook 1984 dictatorship with obliteration of the self as its official ideology, is a nonaligned kingmaker. Hundreds of minor powers are under the Big Three's yoke. All are more or less equally oppressive, and wages war only to pacify their internal populace.

Warning: Archive Panic is to be expected. The timeline spans a thousand years' worth of galactic history and culture, as well as dozens of pocket universes.

The timeline is currently being uploaded onto rvbomally's deviantArt

, complete with some creator commentary.