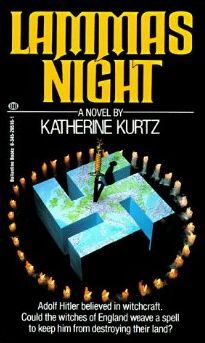 Lammas Night is a Historical Fantasy novel by Katherine Kurtz.

Paralleling the Battle of Britain is another battle, one fought on the Second Road by mystics of both Britain and Germany. The Thule Geselleschaft, led by archmage Adolf Hitler, is working dark magics to boost the effectiveness of the Wehrmacht. Colonel Sir John Graham of British intelligence, temporary high priest of a British coven, is attempting to organize the mystics of Britain to defend their country, but the going is slow until he gets the unexpected aid of Prince William, George VI's youngest brother.