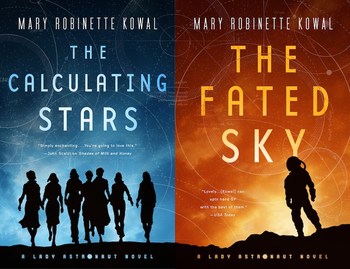 On a cold spring night in 1952, a huge meteorite fell to earth and obliterated much of the east coast of the United States, including Washington D.C. The ensuing climate cataclysm will soon render the Earth inhospitable for humanity, as the last such meteorite did for the dinosaurs. This looming threat calls for a radically accelerated effort to colonize space, and requires a much larger share of humanity to take part in the process.

In 2018, she released the first two books as a duology. The first book, The Calculating Stars, begins with our heroine Elma York and her husband narrowly surviving the meteorite impact thanks to a fortunate camping trip, and chronicles the discovery that the resulting climate change will render Earth uninhabitable, kicking the space race into overdrive as colonization of other planets becomes humanity's only hope for survival. The next book, The Fated Sky, deals with the effort to colonize Mars.

Book three, The Relentless Moon, was released July 14 of 2020, to be followed by The Martian Contingency in 2022.