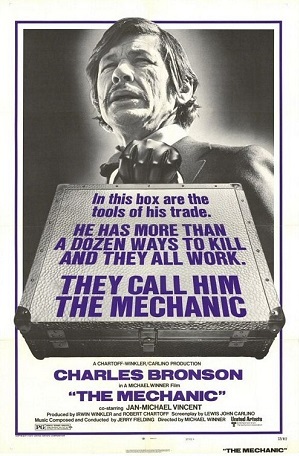 "Murder is only killing without a license."
Advertisement:

The Mechanic is a 1972 action thriller directed by Michael Winner and starring Charles Bronson.

Arthur Bishop (Bronson), an aging assassin, is hired to kill "Big Harry" McKenna (Keenan Wynn), which he does with his usual resourceful genius. At the funeral he meets Big Harry's son, Steve McKenna (Jan-Michael Vincent). Steve becomes interested in the art of being an assassin, so Bishop plays along and then trains the young man to become a Professional Killer. Steve is taught to use the mechanic's tools until he becomes a master. Arthur Bishop's superiors aren't accepting of Bishop doing this, and in the end they find that they can trust no one. It is a defining example of the seventies action film, and has existentialist themes.

Tropes used by the original: