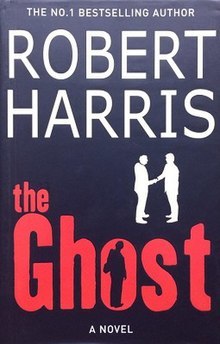 The Ghost is a Robert Harris thriller novel published on September 26th, 2007.

Most of the book takes place at Martha's Vineyard in Massachusetts. Former British Prime Minister Adam Lang is there in the holiday home of his billionaire American publisher in order to turn out his memoirs on a deadline. When the book is not focused at that location, it focuses on the location of Notting Hill, New York, and Whitehall.

Lang has been trying to write his memoirs but it proves to be more difficult than it looks. Mike McAra, Lang's former aide, tried to be a ghostwriter for Lang's memoirs, but he drowns after falling off the Woods Hole ferry shortly afterward. The narrator is an unnamed replacement ghostwriter for McAra. He does some investigating and discovers that Adam Lang has some dangerous secrets. These are secrets that put the narrator in great danger.

The film The Ghost Writer is a film adaptation of this book.

The Ghost provides examples of: