Series / Voyage to the Bottom of the Sea 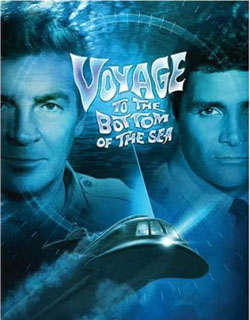 Nelson, Crane, and the Seaview.
Advertisement:

A 1964-68 Irwin Allen Sci-Fi show starring Richard Basehart as Admiral Harriman Nelson and David Hedison as Captain Lee Crane, and set on the experimental nuclear-powered research submarine, Seaview. The ultimate use of the Recycled Script: almost every episode can be summarized as "Monster of the Week is defeated by Laser Of The Week." The first season, filmed and broadcast in black & whitenote except for the pilot, which was filmed in color, featured more serious and thoughtful stories, along with a greater Cold War emphasis. When the series switched to colour starting with the second season, it was used as an excuse for a big dramatic storyline during the switch, and the introduction of a new version of the ship.

Based on the 1961 film of the same name, in which our heroes defeat a global heat wave (caused by the then recently discovered Van Allen radiation belt catching on fire) through Deus ex Nukina. No, seriously. The movie's storyline was later on recycled as a series episode titled "The Sky's On Fire", complete with copious amounts of Stock Footage from the motion picture.

An aquatic recycling of Wagon Train, it preceded Star Trek: The Original Series by two years. Compare with its Spiritual Successor seaQuest DSV.

Voyage to the Bottom of the Tropes: