The Epic Quest of Unfathomable Difficulty!!! 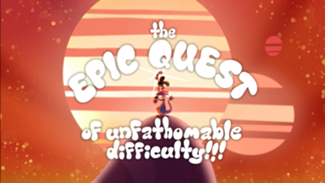 Wander: "Haven't you ever lost something you wished you could get back?" Sylvia: "Besides the last ten seconds of this conversation?"
Advertisement:

Wander and Sylvia are on the run again from the Watchdogs. Sylvia fights them off as Wander is distracted by something. Once she dispenses with their pursuit, she asks what could've caused Wander to leave Sylvia to fight alone. Wander has found ... a sock. Just one. By itself. Which means someone, somewhere, not only has a sock without a mate, but possibly a cold foot! Wander swears to find the owner of the sock.

Sylvia tries to convince Wander it's not that serious, but he will not be dissuaded. Finally they find a hotel where there's a lost and found, and Sylvia convinces Wander to leave the sock there. They're almost out the door before the bell service alien suggests that they go on an epic quest. He describes a number of arduous tasks and quests they must go on to get to the guru, while the screen shows them undertaking them as described. They make friends, and enemies, face dangerous obstacles, rescue multiple princesses, but finally, finally, finally make it to the mountaintop where the guru awaits to answer them one question.

Fortunately, Wander finds a return address inside the sock. Unfortunately, it leads them to a dark, downtrodden planet. They are captured by the ruling despot, and they ask the executioner if this is his sock. He says it's not. They ask if the ruler lost a sock, and the executioner says yes — but he simply bought a new pair. As they are lowered toward boiling oil, Wander's sunny disposition and optimism give out. He says that it's just an old sock that doesn't matter to anyone, and lets it fall.

Sylvia uses her tail to catch the sock, telling Wander that it does matter to someone: it matters to him. With that, she flings the sock at the despot, and asks if it's his sock. The despot rages, and continues lowering them, until a sweet voice out of nowhere admonishes him not to. Destructor looks down at the sock, which has landed on his hand and is now a puppet, talking to him. Destructor recalls his childhood, when he was a happy kid in a sunny kingdom on the happy planet. His father told him if he was to rule someday he'd have to give up childish things, and took the sock away, tossing it into the trash. In his grief for the loss of his toy and best friend, the happy kid became the Despot who ruled the dark and unhappy planet. But now, reunited with his sock, he reverts to the beautiful, happy, golden disposition he had as a child. He opens up the jails and releases all the prisoners, forgives his father, and makes all the prisoners dukes except one... who he makes an archduke. The sun returns to the sky and it begins raining gold.

Wander: ... I just thought somebody's foot was gonna get cold. 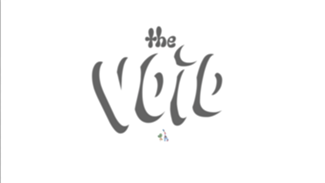 Sylvia: "We're definitely opening this weird space door, aren't we?... No chance of us just moving on, having a normal, relaxing, non-crazy day?... Didn't think so."

Wander and Sylvia are doing their usual wandering through space thing when they come across a doorknob suspended inexplicably in space. Upon opening it, they find an all-white space that seems to go on forever, the door vanishing behind them.

As the pair discuss their situation, they realize the Void is voice-activated and psychoreactive. They begin summoning up all manner of silly things to have fun and play with each other. Sylvia tires of it fairly quickly, and wants to find a way out. For a little while, Wander accomodates her, still being as silly about it as possible. But eventually, Sylvia gets serious about wanting to leave the Void, while Wander is still all about having fun and seeing what he can imagine into reality with the Void's properties.

Sylvia figures that the Void won't generate an exit until both of them want to exit at the same time, and asks Wander to stop playing around and leave with her. They head back into space — until Sylvia realizes that they seem to be passing the same patch of space over and over again. Wander wasn't really ready to leave and imagined a cartoon background and a treadmill to make it look like they'd left. Sylvia is not amused, but Wander tries to entice her to play some more. She remains focused on getting out, to no avail. Wander escalates his playing to the point of generating multiple versions of himself to be his audience while he performs, and press-gangs Sylvia into being his literal puppet.

Sylvia finally loses her temper, but keeps it under control as she reminds Wander that he's completely ignored her wishes while indulging his own — and that while the void may supply lots of imaginary fun: she, Sylvia, is real. Abashed, Wander apologizes and says that he can imagine all sorts of things but he could never imagine a better friend. With that, the real door leading out appears and the pair depart.

Before long they run upon a window hanging inexplicably in space.

Sylvia turns around before Wander can even suggest trying to open it.