Literature / Life Among the Savages 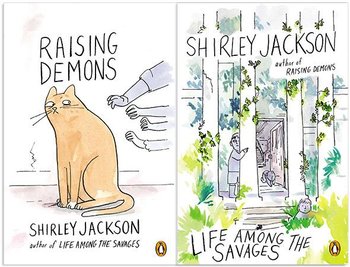 Life Among the Savages (1952) and Raising Demons (1957) are a pair of books by Shirley Jackson, compiled out of short stories she wrote for various women's magazines. They constitute a "domestic memoir" — Sharon Marcus calls it "domestic farce" — describing the antics and misadventures of (a presumably somewhat fictionalized version of) her family, and particularly of her children: Laurie, Jannie, Sally, and Barry.

Life Among the Savages

begins when the family (consisting of the unnamed narrator, her likewise-unnamed husband, three-year-old Laurie, and baby Jannie) abruptly find themselves on the verge of being evicted from their city apartment and frantically search for a new home in the country. A series of misadventures leads them to settling down in a Big Fancy House in a small New England village, where they soon have a new child, Sally, who promises to be the most challenging of all. The narrator barely manages to keep the chaos in check single-handedly (as her husband is nearly useless in all matters domestic), while the children go off on their own adventures, occasionally even informing their parents. The story ends with the birth of a fourth and final child, Barry.

In the second installment, Raising Demons, the family suddenly realizes that they have outgrown their previous home. Another frantic search for a bigger house ("There is no bigger house," insists the narrator's husband) leads them to an accommodating home at the edge of the village...if only they can convince the current tenants that they've bought the place, and the moving men to return their furniture. The children, older now, have developed into four well-defined, independent individuals who each bring their own brand of chaos and comedy to the table. Their mother records their adventures with combined exasperation, fondness and wonder, mixed with the bittersweetness of knowing that childhood eventually ends.

Sound a little too saccharine? Not hardly. This is Shirley Jackson we're talking about, after all. The memoirs are full of laugh-out-loud hilarity and wicked wit, with an incredible eye for the quirks of childhood.