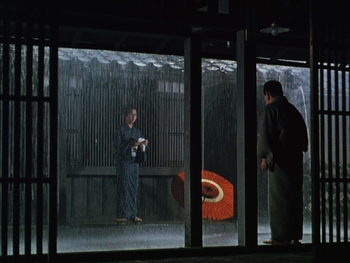 Floating Weeds is a 1959 film directed by Yasujiro Ozu.

A third-rate kabuki acting troupe arrives via ferry at a seaside town in Japan. The troupe is not doing very well, being reduced to playing dinky villages, and its future is in question. Among its members are Komajuro, an older man who is the owner of the troupe and plays the male lead roles; Sumiko (Machiko Kyo), the lead actress and also Komajuro's lover, and Kayo, the younger actress in the troupe. Komajuro has a special reason for visiting this particular town. Living there is Oyoshi, an old girlfriend of Komajuro's, who has a son, Kiyoshi — also Komajuro's son, from their long-ago fling.

Komajuro has not been back to the town to see his son for 12 years; Kiyoshi in the interim has grown from a small boy to a young man with a job at the post office. Oyoshi and Komajuro have kept their secret, with Kiyoshi believing his father long dead and the eccentric actor who's just shown up in town to be his uncle. Komajuro's extended absences while spending time with his old girlfriend and son are noticed by Sumiko. When Sumiko finds out Komajuro's secret, she is filled with jealousy, and she makes an ill-considered decision.

This film is a remake of Ozu's 1934 film A Story of Floating Weeds.