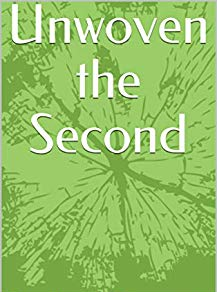 The cover of Unwoven The Second.
The Unwoven Literary Universe is a series of short stories all written by one Arthur C. It's made up of many composite stories that make up a selective canon that goes from 2013 all the way up to 2020. All of them were actually written in 2018 and 2019, they were created back starting in 2013.
Advertisement:

It revolves around the stories of a variable selection of heroes that have to defend their world (or rather star system, as the different locations are all located in a universe known as the Otherworld) from a constant stream of enemies from all different kinds of places.

A ton of stuff happens, as the one true power source is Synergy, whose master, The Creator (better known as Alexei) created the Fandom Seed (Exactly the kind of Fandom it implies) in order to trap a pure version of that energy field into one container which grew over the course of 6 years into a large art gallery (bear with me here) that contained material from different types of art galleries (known as Soul Galleries in Legacy) known as the Folder of Surprise. The reason why the enemies have even shown up in the first place was to seize the Folder, destroy it, and replace it with a gallery of their own, comprised of nothing but (according to Beginnings) "18+ material".

Think of it as Kingdom Hearts meets RWBY minus the academy meets Xenoblade Chronicles. It's that kind of story.

The first story is a small conflict between two students that actually set up the plot of the next installment in the series, Raystorm, where the second student, Vaden, is revealed to be the villain.

The second story is much larger, and is about a very small selection of the cast vanishing outright, and the journey to find out where they are.

A distant sequel to the entire literary universe will be made starting on Jan. 1, 2020 as a Serial Novel, to be finished on January 1st, 2021 entitled Metaphysical. It takes place in a World of Funny Animals as the protagonist, Seraph is thrown into a conflict spanning multiple layers of dimensions. The enemies are animal-shaped Energy Beings called Partials, and the setting this time is a large, Cyberpunk city called Extratone. (Sound Familiar?) This conflict involves a world called "The Metaphysical", plotlines that connect to each other, cards, tons of Shout Outs, slight Tarot Motifs, and even a gigantic mall...? The first book, Kitten Whispers, is set to release near the beginning of February.