Webcomic / The Dynamite Twins and Friends 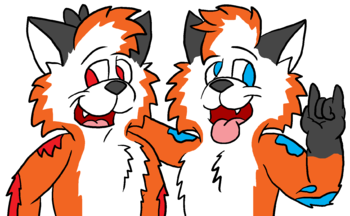 The Dynamite Twins and Friends was a series of webcomics that centered around two twin foxes with supernatural abilities. (And their friends, of course.)

Created by Jordann William Edwards, this series (and its parent franchise) is a brand of the larger Color World Universe, a collection of brands created by Edwards. It also includes a spin-off, a kid-friendly sister series called Bunny and Bear. There used to be a separate series, Flight of the Birds Academy, until Edwards decided to discontinue the comic, transferring its characters to the main TDT series.

The old webcomics have been archived on DeviantArt

, but they can also be found on the series' Facebook

page, on the Tumblr

blog, and on FurAffinity