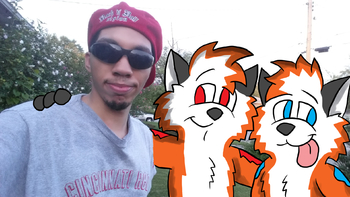 Don't deny it, you'd want your own characters standing next to you, too.
Narrative influences:

Advertisement:
"Hell, yeah, I'm weird, but when have I not been weird?"

Jordann William "JW" Edwards (born January 22, 1996) is a comic artist, illustrator, animator, writer, and entrepreneur. He's the creator of The Dynamite Twins and Friends and the co-creator of Bunny and Bear with his sister Jazmine. He is also the founder of MajesticBlue Studios, which houses those projects. And he's a furry; his fursona is Bleu Major.

He was also involved in Space Pirate Captain MacTaggart (even developing the partial spin-off Bloody Cutlass), before ceding control to creators Craig Black and Jacob Elmer.

His works tend to include satire, parody, and deconstruction; Black Comedy; mythology and fairy tales; Science Fantasy; the Furry Fandom; and tons of sex, all drenched in a brightly-colored, surreal hyperpop aesthetic, particularly in TDT and Friends. He also brings that same hyperpop visual aesthetic (in a much tamer, kid-friendly package) to Bunny and Bear.

He's a huge champion of diversity in comics and animation and a champion of pushing both as art forms. He basically sees himself as a bit of an activist, promoting works from non-white and LGBTQ artists, of which he is both.

Oh, and he's also an occasional musician and record producer under the alias Bleu Major (which, again, is his fursona), with an EP released. He's currently one-half of a hyperpop duo with his little brother (not technically, but he sees them as one) nanochii called bunnykit.