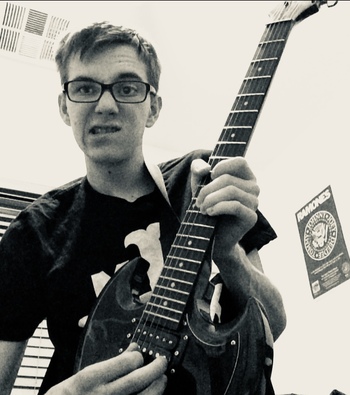 Rock will never Die until I Die!!!
Visual influences:

Advertisement:
Jacob "Fox-Jake" Elmer (born November 23 1996), is a cartoonist, illustrator, musician and guitarist from Arizona. He's known for being the creator of Lookin' Bright, as well as his frequent collaborations with Jordann William Edwards, including The Dynamite Twins and Midnight Fox. He was the co-creator and lead artist for Space Pirate Captain MacTaggart, which ran from 2015-2017.

Jacob is also a punk/metal guitarist.

Most of his art can be found on DeviantArt here

Rockin' tropes associated with himself and his works: