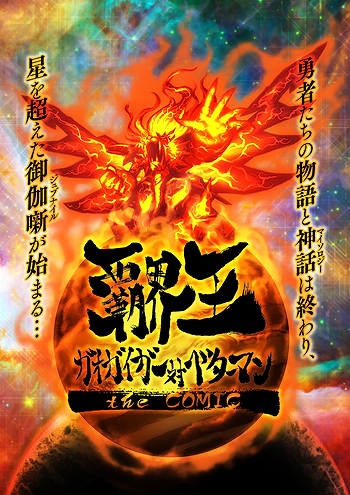 “The story and mythology of the Braves has ended, but their star-spanning fable begins...”
Advertisement:

King of Kings: GaoGaiGar vs. Betterman (覇界王～ガオガイガー対ベターマン～ / Hakaioh: GaoGaiGar vs. Betterman) is a Web Serial Novel serialized from September 30, 2016 to March 17, 2021 directly by Sunrise's creative contents team under their House Pseudonym, "Hajime Yatate" and released as a website free-to-read through their collective publishing branch, "Yatate Bunko." It acts as a conjoined sequel to both The King of Braves GaoGaiGar: FINAL and Betterman.

The setting takes place 8 years after the finale of GaoGaiGar Final. In year 2016, the former kid heroes of Gutsy Galaxy Guard—Mamoru Amami, and Ikumi Kaidou have grown up into adulthood and are now continuing their earth defense service for Earth’s new formed GGG—Gutsy Global Guard, piloting the new King of Braves: GaoGaiGo in hopes to harness the energy of THE POWER for their mission to rescue the GGG Braves left behind in the Trinary Solar System. They head to Jupiter—over which the "Conqueror King" hangs ominously.

GaoGaiGar vs. Betterman gained an ongoing free-to-read Webcomic adaption drawn by Naoyuki Fuijisawa, and serialized since September 25, 2018 with one drama CD recorded as a premium package with the manga’s first Tankobon release. This title will also be a rare "Video Game First" by debuting, and solidifying many aspects of the project in fields of animation, character design, mecha design, color design, and localization terminologies via Super Robot Wars 30.

Tropes in King of Kings: GaoGaiGar vs. Betterman include the following: