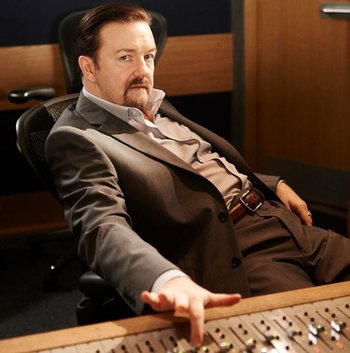 "I love soundchecks... checking all the... sound."
Advertisement:

David Brent: Life on the Road is a 2016 British Mockumentary film created by Ricky Gervais and set in the same continuity as The Office (UK) and by extension, The Office (US), in which Gervais reprises his role as Unsympathetic Comedy Protagonist David Brent.

Ten years after being made redundant from Slough-based paper merchant Wernham Hogg, David is working as a sales rep for sanitary product supplier Lavichem, but has not given up his dream of being a successful musician. Using up all his remaining annual leave — and taking additional unpaid time off work — David takes his band Foregone Conclusion on a three-week tour of venues around Berkshire in the hope of being offered a record deal, and finally achieving his dream of rock stardom.