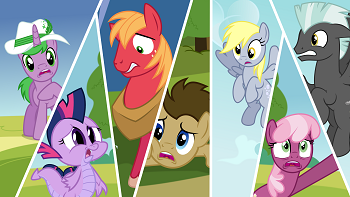 The Flipverse is a fanfiction series and universe based upon My Little Pony: Friendship Is Magic, created by Bed Head

. It is an Alternate Universe in which the roles and species of Twilight Sparkle and Spike are flipped; Spike is a unicorn stallion, and Twilight is his dragoness assistant.

Spike Flail is a reporter for the Canterlot Sun newspaper, looking to make a name for himself in the world of journalism. Lacking much field experience, he is given the rather routine assignment of going to Ponyville to cover the Summer Sun Celebration. But when Nightmare Moon returns after her thousand year banishment, it's up to him and five new friends - Big Macintosh, Cheerilee, Ditzy Doo, Thunderlane, and Time Turner - to find the Elements of Harmony and save Equestria.