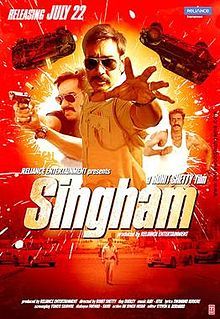 Singham is the first of two Hindi action/comedy films. Released in 2011, it was directed by Rohit Shetty and starring Ajay Devgn as the titular character.

In the city of Goa, India, an honest police inspector named Rakesh Kadam committs suicide following false corruption charges levied against him by corrupt businessman/gangster Jaikant Shikre. His widow, Megha Kadam swear revenge, but due to Shikre's influence within the city, is powerless to do anything.

At the town of Shivgarh near the Goa-Maharashtra border, Bajirao Singham is in charge of the local police station, and commands a great deal of respect from the townspeople by mediating most of the problems without pressing charges. When Singham demands that Shikre reports to his police station to sign off on sign off on his bail regarding a murder charge, Shikre uses his political influence to have Singham transferred to Goa, where he can take his revenge on Singham.

This film's sequel, Singham Returns, released in 2014. A film set in the same univerrse called Simmba came out in 2018. Singhham also received an animated TV show in 2018 called Little Singham.