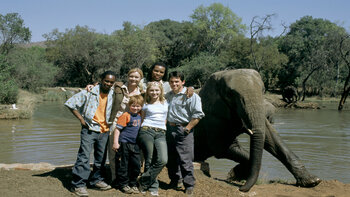 Jennifer "Scout" Lauer (Anastasia Baranova) moves to South Africa from New York City to live with her mother Cheryl (Chantell Stander), stepfather Roger Shickler (Ashley Dowds), and stepbrother Tyler (Jarred Uys) at a tourist lodge once her father Dennis (Nick Boraine), a professional photographer, goes off on a year-long assignment. While she's adjusting to the culture shock, she reconnects with her Forgotten Childhood Friend Bongani Sabisi (Freedom Hadebe), and initially tries to hide her psychic ability to connect with animals. However, African people are far more accepting of her gift than Westerners are, and so the show follows her and Bongani solving problems, having major cultural dissonance and growing closer. The show provides heaps of Character Development for Scout and, while not having any major story arcs, is best viewed in correct order. It currently is complete, and reruns used be found on Discovery Kids (now Discovery Family).

Has nothing to do with this Scout. Or that scout.