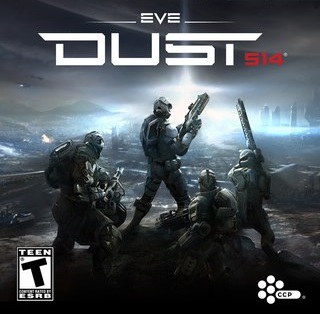 DUST 514 is a First-Person Shooter released in 2012 by CCP, and directly tied into their previous game EVE Online.
Advertisement:

Players take the role of clone mercenaries, who are elite soldiers made immortal using cloning technology and consciousness transfers. For much of Eve history, only capsuleers were immortal because the technology required to download consciousness was linked to a capsule that encloses them and leaves them in suspended animation. The capsule was designed specifically as an interface for pilots to control the ship that they were placed within. However, the discovery of a special implant made it possible to achieve a transfer of consciousness without the use of a capsule, so it became possible to make immortals that were not pilots. Dust 514 players take the role of immortal ground-based soldiers which were created by the military shortly after the implant was discovered.

DUST 514 uses a similar module-fitting mechanic to its predecessor, just with armored "dropsuits" instead of spaceships. Different skills are also needed to use different modules, but a player now accumulates a pool of skill points, both passively (a point every few second) and actively (based on performance during battles).

Due to mediocre player numbers and a mixed reception, the game was shut down in May 2016 but CCP plans to create a PC successor called Project Legion.