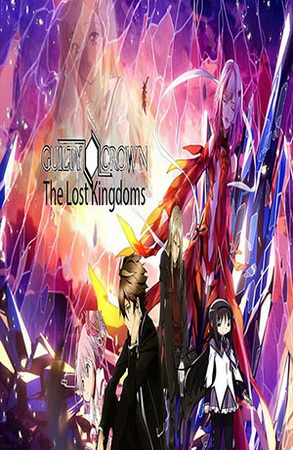 The retelling of a boy involving change with magical girls.
Advertisement:

Guilty Crown: The Lost Kingdoms is a retelling of the Guilty Crown series with the five magical girls from Puella Magi Madoka Magica as AU guests. It somehow averts the tropes use in typical crossovers, and serve as a movie fic with nine chapters.

The setting is also a stand-alone AU of a notorious fanfic franchise called YuYuGiDigiMoon, in which the outbreak of Lost Christmas (taking place in December 2012 instead of 2028 to coincide real-life predictions) wiped out most of Japan’s heroes. This serves as a background and new plot twists unlike the show for the characters to interact in dark times.

- The main story itself.

- A collection of sidestories. Not really required reading, but still worth a look.

- Non-canon. A co-authored character corner/theater that converts to a humorous story about a Halloween party at New York City with various crossovers of pop culture. The characters of GC: Lost Kingdoms made guest appearances.

- An alternate ending of the story that is M-mature.

The Devils of Cocytus

- An M-mature pairing story of Homura Akemi and Mana Ouma.

''The Ningyo and Her Legs

' - An M-mature pairing story of Ayase Shinomiya and Sayaka Miki.

- A one-shot of Funeral Parlor having a reunion that they also meet the Sword Art Online cast.

This fanfic provided examples of: