"The following is a fanfic-based parody. Please support the official release." 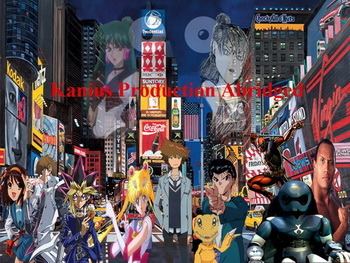 Kanius Production Abridged are character corners are like a fanfic The Abridged Series that are mainly consisted of ‘party corner specials’ and skits instead of abridging an episode/chapter. They are mainly written by Kanius

with contributions of other authors.

Generally in these corners, most of the characters are cosplaying to celebrate and meeting various people (such as both Tais of Digimon Fusion Kai and YYGDM meet early than the actual fics). The characters both canon and OC’s personality remain similar. Expect some unexpected twists nearby.

Unlike the author’s story fics, these corners give more freedom to inspire humor and ideas (even what-if ones) that never had the chance to use. Plus, the unique concepts use in this series might eventually be use in Kanius' fanfics.

The first skit made as a Halloween party while Kanius and Chaosblazer did Siege of GranDracmon in 2012.

The second corner is done while Digimon Fusion Movie: Yagami’s Second Coming is ongoing at 2013. The Holiday themes are consisted of Halloween, Thanksgiving, and Christmas.

Release in October 2014, this special marks a huge game changer as it is the first to include a wider range of characters and a plot. It is based on Disney’s House of Villains, and is about the Puella Magical Girls inviting every guest to their dinner theater club in NYC, the House of Madoka. However, the villains themselves plan to take over the house by midnight. Once again, the heroes have to save the party from the baddies.

The Kuiper Belt Senshi are inviting the Puellas to their own party along with a few side-plots.

Since they are banned in House of Madoka, the villains decide to host their small party. Hilarity ensues that the setting feels like a high school/college reunion.

The series finale. It will follow a similar format as the third corner, only it’ll take place outside of NYC and more expansive. Unlike the first three corners, it will be much grimmer as a group called the League of Extraordinary Da’ath seeks to devastate New Years Eve. It’s up to the heroes, villains, and other characters to team up in order to stop them.

Has a Tropes Page.

Final Party Corner/Wrath of the Defiants

Series epilogue. To be announced.

The corners provide examples of: