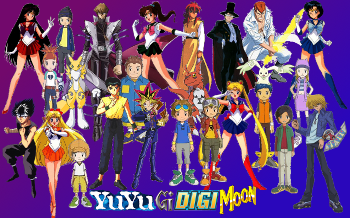 Four anime series that meet up with many adventures.
"As for this story, it was only just the precursor to a new era of heroes."
-Chapter 1 of Wrath of Pharaohmon Redux

Ongoing since November 2003, YuYuGiDigiMoon is a Mega Crossover franchise by Kanius

(who also writes Digimon Fusion Kai, the Akane no Mai franchise, and Akane No Guilty Crown) featuring the characters of YuYu Hakusho, Yu-Gi-Oh!, Digimon, and Sailor Moon, as well as several Original Characters. It is part of Kanius Productions.

The franchise spans 3 "Seasons", 1 Side Story (short story featuring only 1 subgroup), 1 "Movie" (short(er) story featuring most of the cast), and a collection of Gaiden short stories, including a "Special Gaiden" released as a separate story, an OVA, a three-fan-continuity crossover, an AU stand-alone, and an Abridged/Corner series.

Throughout the years, the franchise sees a variety of changes in fleshing out ideas and collaborations. LazerWulf

then makes the author's dream crossover with Digimon Fusion Kai a reality with his Digimon Accel Stream fic to form a triad. Ford1114

becomes a secondary beta reader and does an AU story that crossovers with Guilty Crown and Puella Magi Madoka Magica, alongside expanding the Character Corner series, not to mention refreshing ideas for the franchise.

While Digimon Fusion Kai relates to the Dragonball series, YuYuGiDigiMoon's longer process is similar to the Big Three Anime (Naruto, One Piece, and Bleach). The franchise even celebrated its 10th anniversary (11/2013). Now that the season trilogy is finish, there are a few more stories left to tell through various aspects till it reaches Defiants as the eventual final adventure.

Beginning in 2016 with fanfic activity begins to wane alongside the last remaining fics, Kanius has plans to do his debut novel after years of brainstorming, more will come in the future. The author and Ford1114 first discuss this last year on email, but it has been on hold for a long time (other than some tidbits in their other mails), not to mention Chaosblazer's emails became spamming enough to delay this important life-changing goal. Since 10-11 months, the discussions will properly be resume without interruptions from 4/10/2016 3:49 PM since the author's last reply to 3/11/2017 6:29 PM (Making it the most overdue email almost to the point its development hell/vaporware. This is to the point that Ford1114 considers doing A/Ns based on this for VH Segment 9, alongside the aftermath of Segment 8 and how the author will properly regain control/taking charge of situation (They'll not be as long as Segment 8's A/Ns, but it's still accountable).) after the author's reply on that mail. Kanius begins writing his first novel at June 2017.

As of February 2020, with the exception of Wrath of the Defiants, all other future projects have been canceled. YuYuGiDigiMoon has effectively been put on hold. Any impending return to finish the final story remains to be seen. The release date of the series finale is November 30, 2023, 20 years since the original Wrath of Pharaohmon was released back in Nov 30, 2003 in celebrating its 20th anniversary.

A four OVA chapter legacy reboot titled Shin-YuYuGiDigiMoon has been released while the original is currently on hiatus. 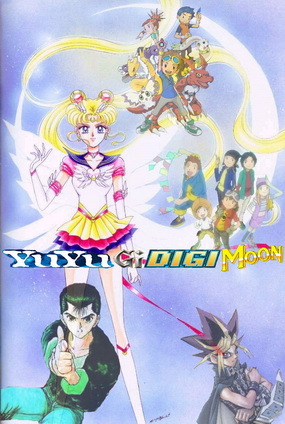 The main bulk of the franchise. These three stories consist of grand adventures for the characters and other developed expectations. They connect one another efficiently with foreshadowings that will ultimately lead to the climatic result in Season 3.
The Three Seasons 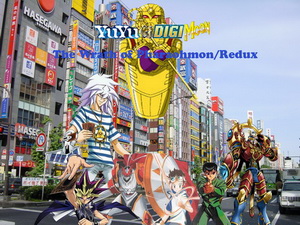 - The first entry, created in 2003. The Tamers, Legendary Warriors, Duelists, (most of the) Sailor Senshi and the Spirit Detectives are living in Tokyo when an evil digimon named Pharaohmon escapes into the human world and possesses a young boy named Lance, then begins plans of world domination, which the heroes must band together to stop. Starts out a bit rough, but it gets better about halfway through, when Pharaohmon creates a simultaneous Cell-style battle tournament and Duel Monsters tournament. 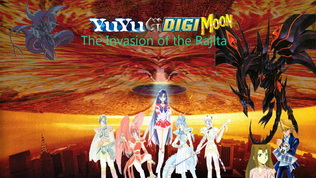 The Invasion of the Rajita

- The Rajita, alien enemies of the Sailor Senshi arrive and use the power of the Orichalcos to steal the souls of the people of Earth. The Tamers awaken the spirits of the Four Saint Beasts (Suzaku, Seiryuu, Genbu, and Byakko) and receive new powers (and training from the Sailor Senshi) with which to fight. Meanwhile, Kaiba tries to fuse the Digital World with the world of the Duel Monsters, but due to a slight miscalculation, it works a little too well and the Rajita use it to capture the Digimon Sovereigns, leading the DigiDestined to arrive and help the heroes out. 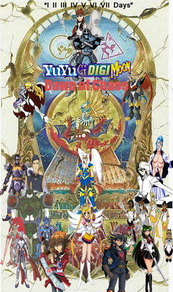 - The Sailor Senshi, Digi-destined, Spirit Detectives, and Duelists have unite to face their four biggest challenges. Many digicycles ago, the Dark God Valmarmon was defeated by the Light God Granasmon and split into seven pieces, which were spread across the Digital World(s). Now, evil digimon led by Madoudramon are on a hunt for the missing pieces in order to bring Valmarmon back to life, and the DigiDestined, Tamers, Legendary Warriors, and DATS must unite to stop them. Meanwhile, the Neo-Rajita, alien survivors who fled to the Digital World, resurface and attack the Sailor Senshi, while the Demon Priests from the Meikai attempt to retrieve the Demon Stones from the Spirit Detectives in order to revive their Dark God, the taiyoukai Arago. To top it off, a group calling itself the Paradais Knights is using technology from the future to hack into Kaiba Corp's satellite to remove the Duel Disks' holographic safeties and force the Duelists, (including those from Duel Academy) into duels where the damage is real. Things look bleak until the Neo Senshi (led by Chibi-Usa) and the Signers arrive from the future to help out. However, a villainous duo manipulating the whole setting, a dark sailor senshi named Sailor Charon and the cloaked Prophet, are scheming for the apocalyptic 'Dawn of Chaos'/Actually towards the end, its a cover up for The End of Days which finally reveals in Chapter 61 that the duo reveal themselves to be Sailor Chaos and Millenniummon. Their final phase is to send all the heroes into various dimensions of anime and other popular culture, so that once the two villains fuse into ChaosMillenniummon, the monstrosity plans to assimilate and destroy many dimensions (alongside their enemies) to expand their network and for chaos to dominate over life. In the end, the heroes unite to defeat the Paradais duo and a new age commences for the trilogy's closure.

These are tie-in stories that take place before and after a 'season trilogy' story(s). They give more background information and future events, introducing new characters, and are not as lengthy as a season.
List of Stories

These stories are where the characters appear in some form.

Character Corner
The abridged series by Kanius. These versions of the characters appear in the first two segments/omakes in Siege of GranDracmon and Yagami's Second Coming.
Expanded Universe
Think the Star Wars (or Star Trek) Expanded Universe. Stories written by other fanfic authors that've created stories set in the YYGDM universe. They've used other characters from anime outside the big four franchises or created their Original Characters to exist in said universe, creating interactions with characters from the main YYGDM series. Story entries could even take place outside Japan and the United States. This is a section established for writers who wish to submit entries to the YYGDM series. Note: These stories are strictly non-canon from the main series.

The stories provide examples of:

One thing is for sure, we're in for a huge game changer that'll shape the rest of our lives.
— Takato Matsuda (Wrath of Pharaohmon Redux, Final Chapter)