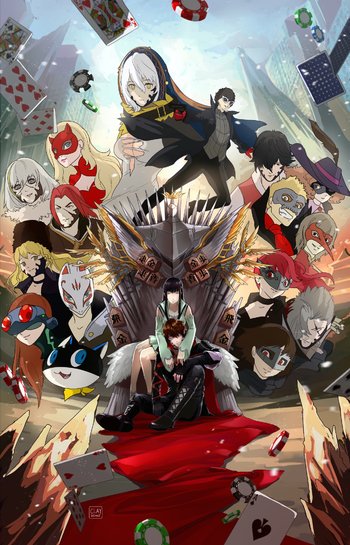 .
"Who knew coming back to Yongen-Jaya would be this exciting? How long has it been almost three years? Time has gone by, hasn't it? Now, after nearly 3 years, the Phantom Thieves will be reunited at the only place best fit for our reunion gathering."
— Ren Amamiya
Advertisement:

The Akane no Mai franchise is established by Kanius

(Who is the author of Digimon Fusion Kai, YuYuGiDigiMoon, Shin-YuYuGiDigiMoon, and Akane No Guilty Crown), crossovering Persona 5 and Code Vein, with elements of Nioh and Kakegurui.

It was originally conceptualized by Allfather-Ford

with Persona Vein, which started off as a six-chapter (including an Intermission) OVA fanfic. Over time, it grew to be more compelling for both Kanius and Allfather-Ford with exploring new concepts and the characters within. After the author completed the story, he officially passed over to Kanius by starting off with an official sequel with Allfather-Ford involved.

Unlike Kanius's past fanfics, this fan-continuity is envisioned more like a draft of a novel series, although it has a few AU traits (Such as the Persona characters having romantic couples while in canon they don't have, and that Tokyo Disneyland/DisneySea is used instead of Tokyo Destinyland), this feels closer to an 'official canon' feel and not a full-out AU (Such as no AU backstories of the Phantom Thieves). Because of this, Kanius has the chance to hone more of his novel writing skills early, while the author is currently writing his debut novel.

The series also focuses on two perspective characters: Hifumi Togo and the author's take on the Code Vein male protagonist. Both are drawn to these new urban adventures while receiving development for themselves and the world in general.

There are unmarked spoilers in the trope pages.

open/close all folders
The Main Stories (Early Draft)
Persona Vein: The first entry of the series. A Revenant is thrown to the present timeline by an unknown force. Within his existence; this causes the resurgence of the Phantom Thieves, Yokai and Japanese folklore, the monsters from the Revenant's world, and two young women involved in an enthralling mystery.

Urban Legends: The sequel of Persona Vein. "It's coming. It's here." Said the female Revenant. A man with no memories and a Shogi woman meet again. Thieves and Revenants cross paths. Fates intertwine when dark entities manipulate and tweak the timeline. Mysteries of the dark entities will be unraveled.
Advertisement:
The Main Stories (Final Draft/Revision)
Akane no Mai

Book I is called Fellowship Forged by Code and has concluded.

- The early draft timeline of the series.

- Voices of the characters.

- Based on Ch. 12 of Urban Legends as a one-shot crossover with Dowdz's Crimson AU.

- Voices of the Wulf-Edda characters.

- A Guilty Crown perspective story of Urban Legends final three chapters. Ouma Shu has gone missing. After forming a new organization, Shinomiya Ayase, Funeral Parlor, and other world heroes cross over into a new reality. This reality is a world occupied by Phantom Thieves and Revenants. An anomalous force spawned from humanity's darkness wreaks havoc, prompting Ayase and her team to find Shu and stop this dark avatar.
Non-Canon Material
Akane no Kingdom Nintendo

- A trio of video game characters from another reality falls into another: the world of the Phantom Thieves. This is a fanfic collaboration between Ford1114 and KingdomKey23. This is a non-canon crossover one-shot of our Akane no Mai series and KingdomKey23's Kingdom Hearts: The Nintendo Version Remixed fic.

The Akane no Mai franchise provides examples of:

Needless to say, life moved forward. However, there was a question of what new urban adventures awaited for these two and the other ordinary civilians.