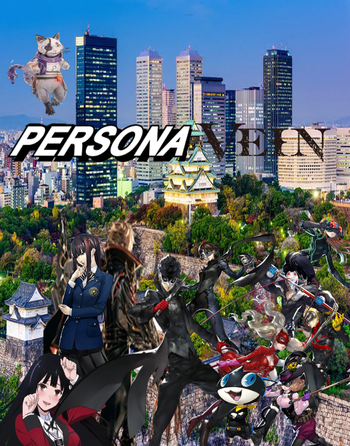 Here we have the return of the Thieves; joining alongside are a Revenant, a Shogi player, a Nekomata, and a compulsive gambler.
Advertisement:

is a Persona 5 and Code Vein crossover, with elements of Nioh, and Kakegurui.

It is part of the Akane no Mai series.

Taking place four years after the canon storyline, the former Phantom Thieves are having normal adult lives. However, a Revenant (Who is the main customized Code Vein character) named Sion is accidentally transported to the present from his future timeline. Within his existence, this causes the reawakening of the legendary vigilantes, the involvement of Yokai and Guardian Spirits, the Lost monsters from Sion's world, and two young women (Hifumi Togo and Yumeko Jabami) to be involved in one mystery.

This story feels like an OVA with six long chapters akin to Digimon Adventure tri., especially the roles given to the Phantom Thieves and Hifumi. The first three chapters are serve as a promotion to Code Vein before the game's release. Meaning, this is the first Code Vein-related fanfic to date. Originally, the author would have planned the later chapters (Act 4 - Final) to be uploaded after Code Vein's initial release (September 2018), but since the game is pushed back to 2019, he has completed the story and showed surprises.

A sequel entitled Urban Legends is written by Kanius

with the author involved in the production.

Also, an upcoming consolidated story remake of both this and Urban Legends is coming in 2020. It will bring new changes/corrections relating to Persona 5 Royal and the completed Code Vein, alongside other things serving as a revise/final draft.

Archive On Our Own Link