"My name is X, a watcher of the Digital Worlds… and I am here to tell their story."
— From Chapter 1 of Digimon Fusion Kai before the story begins. 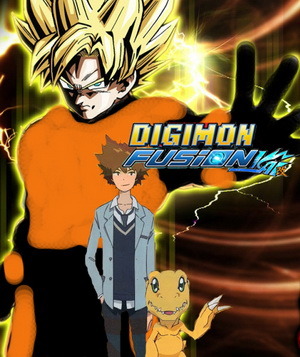 It's Digimon playing the role of Dragonball Z.
Advertisement:

is a Fusion Fic mega-series that combines the characters & plot of Digimon and the plot & recurring themes from Dragon Ball Z. The Digimon characters are in the roles of the DBZ cast. This long-running fanfic series has been written by fanfic writer Kanius

, best known for his YuYuGiDigiMoon series. It is part of Kanius Productions.

This series predates his YuYuGiDigiMoon Mega Crossover and owes its existence to this ancient Digimon/DBZ Fusion Fic. The series as a whole has been posted at least twice (technically three, counting the ongoing revision process). Once from 2001-2002, and a second run that lasted January 2002-April 2005 with supplementary fics that lasted up to May 2006. The first versions have long been deleted off Fanfiction.net. The previous second versions remain up.

In May 2010, Digimon Fusion made its return with the 'Kai' brand.

This series has been officially connected to fanfic YuYuGiDigiMoon and Digimon Accel Stream with the release of Across Dimensions. This is all thanks to a dimensional traveler named Karin Osaka a.k.a. Sailor Sedna, who has befriended a Future Trunks Expy named Dimitri Ishida. 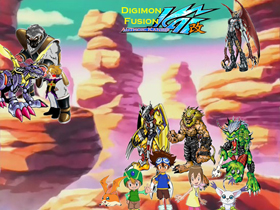 "And so it begins" 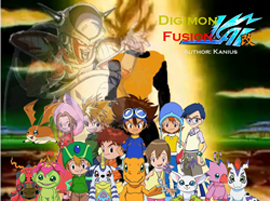 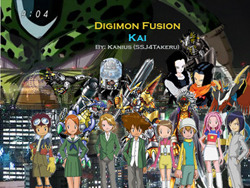 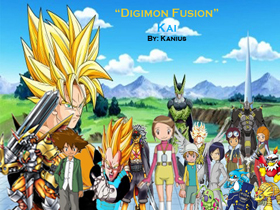 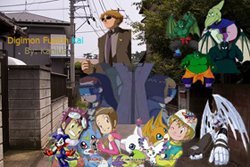 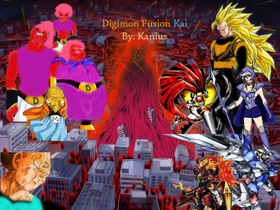 "Welcome to the new age"

The abridged series by Kanius. These versions of the characters appear in the first two segments/omakes in Siege of GranDracmon and Yagami's Second Coming.
Advertisement: