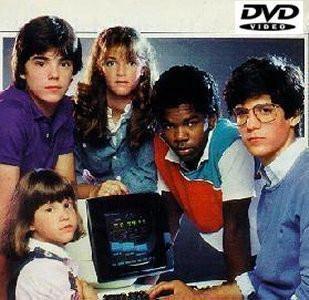 Clockwise: Alice, Jeffrey, Richie, Cherylnote Richie's little sister, and Ham
Made in 1983/84 and lasting a single season of 18 episodes, this show was about a teenage computer expert and his friends who would help the police and/or newspaper reporters solve crimes. An Unintentional Period Piece of 1980s home computing. Starred Max Gail (from Barney Miller) as a reporter. Notable for its mostly-realistic depiction of how computers work (or worked at the time). For example, they completely avert the "Enhance Button" trope - when they zoom in on a blurry image of a thief, the result looks like a pixellated bowl of oatmeal.
Advertisement:

The Other Wiki has an article on it here.

Exhibits examples of these tropes: