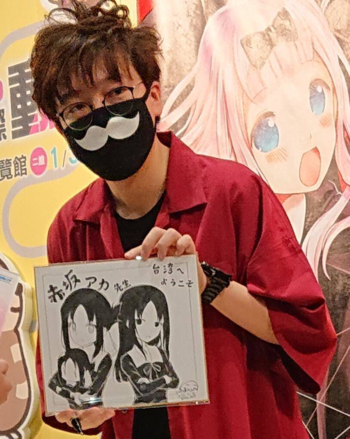 Aka Akasaka (赤坂 アカ, born August 29, 1988 in Niigata Prefecture) is a Seinen manga artist. Besides drawing manga, he also works as an illustrator and character designer.

After working as an assistant, he debuted in 2011 with his first serialized manga, an adaptation of Hikaru Sugii's light novel Sayonara Piano Sonata in ASCII Media Works' Dengeki Maoh magazine. In 2013, Akasaka's own serialized manga ib: Instant Bullet was serialized in Dengeki Maoh, but was prematurely ended after 25 chapters in 2015.

In the same year, Akasaka launched his new work Kaguya-sama: Love Is War in Shueisha's monthly Miracle Jump. The romantic comedy series instantly became a hit, so that in March 2016 the series was transferred to Shueisha's Weekly Young Jump. The manga received two manga spinoffs, a light novel, an anime and a live-action adaptation. In April 2020, parallel to Kaguya-sama, Akasaka launched a second series in Weekly Young Jump, Oshi no Ko, with him as author and Mengo Yokoyari as artist.

, which he regularly updates with news about his works.