Literature / The Rules of Attraction 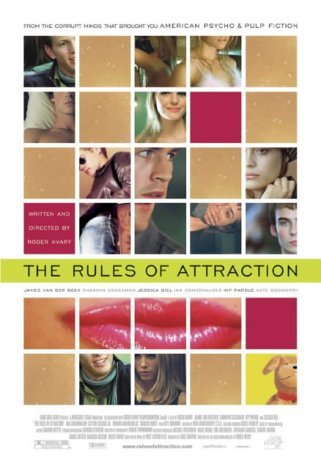 "No one ever likes the right person."
Advertisement:

The Rules of Attraction is an 1987 novel, a Black Comedy Satire by Bret Easton Ellis about students at an East Coast liberal arts school in the USA. Set during The '80s, with Ronald Reagan still in power, there's boatloads of sex, drugs and booze (as per every Ellis book ever), as well as rampant disaffection and angst.

Though it occasionally detours to other people, the story switches mainly between the points of view of three different characters:

The book explores a Love Dodecahedron or two amid a thick mire of substance abuse and seemingly endless parties. The story is told through three distinct voices and though this book fits the Ellis mold, it offers up some great twists and does intriguing things with the narrative device of POV-switching. A must-read for anyone who likes Ellis' work. Given its subject matter, it isn't nearly as gruesome as Ellis's other works, though it is still dark. As such, most events - including the suicides of background characters - are played for laughs as college students being melodramatic.

There was also a movie adaptation of the book in 2002, from Roger Avary, which Ellis names as his favorite of the adaptations of his work.

The book and the film adaptation feature examples of the following tropes:

Alternative Title(s): The Rules Of Attraction