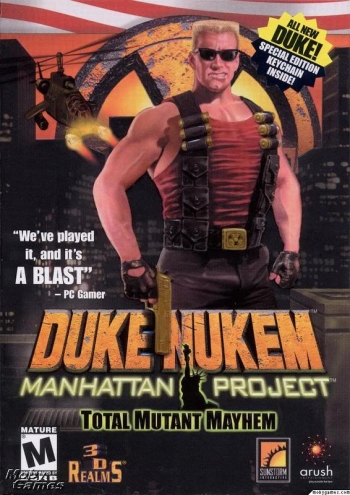 "There's a worm in the Big Apple. Radioactive green GLOPP has flooded the city's water supply, turning every sewer dwelling creature it touches into a man hunting mutant. This was no accident — it's the work of Morphix, a brilliant mastermind gone mad. But when things go bad in the city that never sleeps, there's one man who can be counted on to take out the trash: Duke Nukem. Hail to the king, baby!"
— Game's intro
Advertisement:
"Babes, bullets, bombs... damn, I love this job!"
— Duke

Duke Nukem: Manhattan Project is the fourth entry in the Duke Nukem franchise. It's a sidescrolling platformer, somewhat in style of the first two Duke Nukem games, developed by Sunstorm Interactive and published by ARUSH Entertainment in 2002.

The game is set after the events of Duke Nukem 3D. This time, Duke faces another Mad Scientist, Mech Morphix, and his army of mutants and robots. Morphix wants to use a radioactive slime called G.L.O.P.P. to mutate insects and other species into giant monstrousness.

Manhattan contains the same side-scrolling gameplay of the first two games, but with the environment itself constructed in 3D, producing an interesting 2.5D hybrid of the earlier games, plus Duke's attitude and mannerisms from Duke Nukem 3D.

A port of this game was released for Xbox Live Arcade in 2010, made directly by 3DRealms.