Video Game / Sonic: Before the Sequel 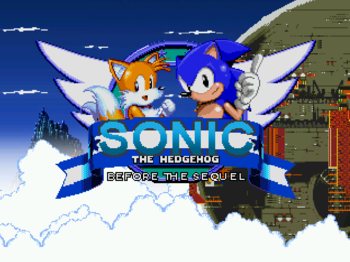 Sonic: Before the Sequel is a Sonic the Hedgehog fangame made by LakeFeperd in the Sonic Worlds engine. Originally released near the end of 2011, it got a update in the following year with a unique soundtrack by Falk Au Yeong, KgZ, Andy Tunstall and Funk Fiction.
Advertisement:

It begins just after the end of Sonic 1, when the Chaos Emeralds suddenly teleport Sonic to a place where he can see Dr. Eggman's Death Egg being built far away. Sonic sets out to stop Eggman's plans and later meets Tails, who is eager to help him.

Check out the game and have fun: (First Version)

A sequel named Sonic: After the Sequel has been released,

and a side game called Sonic: Before the Sequel Aftermath has also been released.