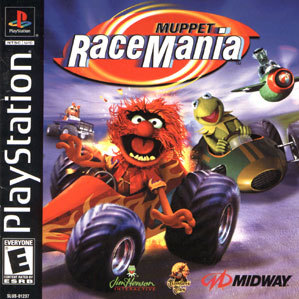 Muppet Race Mania is a PlayStation racing game developed by Traveller's Tales, and published by Midway Games in North America and Sony Computer Entertainment in Europe, and released in 2000. It features a majority of characters from The Muppet Show (and characters from the films).

This game marked the first vocal appearance by Janice since the death of Richard Hunt. She, along with Scooter, were performed by Matt Vogel, the only time he voiced these characters. Rowlf the Dog (voiced by Bill Barretta by this point, but in this game by John Kennedy) and Link Hogthrob (voiced by Steve Whitmire) also make their major vocal debuts after the death of Jim Henson.

One significant difference of this game that sets it apart from the more popular Mascot Racers, like Mario Kart, is the boost mechanic. You collect Food on the racetrack that fill up a meter. You can use this early to give yourself a boost, or fill it up to full to access two options. One is the MegaBoost, which turns your racer into a blue star that sails over the racetrack either to catch up when you're lagging or to create a huge lead. The other is a special power that varies with each Muppet, but achieves the same result: All other racers are hindered by various effects for five seconds…and "nets" you their vehicles for your Muppet to access in future races.

The game has a total of 34 tracks based on sites in the following:

Waldorf: You know what's the best part of this article?
Statler: No. What?
Waldorf: When you finally reach the end of it.
Both: Do-ho-ho-ho-hoh!