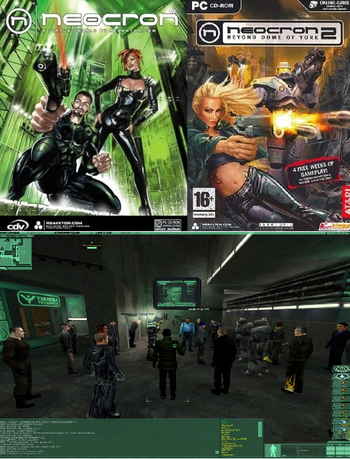 Neocron and its later expansion-turned-sequel, Neocron 2: Beyond Dome of York is, as considered by many, the very first (and perhaps only) cyberpunk MMORPG, fusing together elements of both traditional MMOs and the relatively faster-paced combat style seen in first-person shooters; in a time long before "action combat" (such as in Guild Wars 2) was a marketing buzzword in the MMO scene.
Advertisement:

The original game was developed by Reakktor Media and published in 2002 by CDV Software, while its 2004 sequel had 10Tacle Studios take up publishing duty. The game received middling, mixed reviews and netted a Metacritic score of 66, as its FPS-style interface and combat systems proving rather divisive.

Despite its presence on this site's Defunct Online Video Games list, the game - despite now being sixteen years old (two more than the now seemingly immortal World of Warcraft) and its original developers having experienced financial troubles twice - is still in an active if played-by-few state, the reins of the game having been given to a team of skilled fans.

Neocron and Neocron 2 provide examples of: