Film / What Happened to Monday 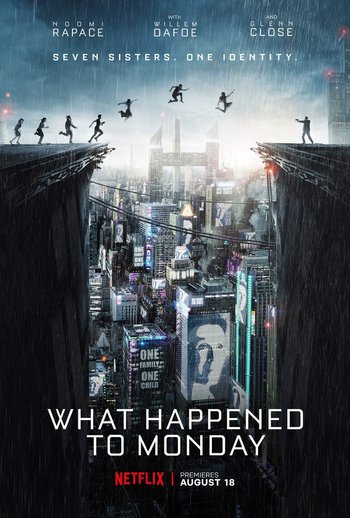 In a World… 20 Minutes into the Future, where a population explosion threatens the sustainability of the planet, the population is limited to only one child per family in a decision spearheaded by Nicolette Cayman (Glenn Close). The law is strictly enforced; any siblings caught will be forcibly put into cryosleep, to be awoken only when the population abates. Complicating this, crops genetically modified to feed the massive population have also produced a large number of multiples, including those birthed by Karen Settman, who has a litter of seven identical girls. Their grandfather (Willem Dafoe) secretly takes them all in and hatches a plan to keep them safe: after naming each of them after a day in the week, he allows each one to leave their secure apartment on the day of the week they're named after in order to socialize, with all the girls taking on the singular identity of Karen Settman.

Decades pass, and the girls (all played by Noomi Rapace) have all managed to evade suspicion and capture, though some are beginning to grow restless and resentful of being unable to have discrete public lives. Eldest sister Monday admonishes them and reminds them of the importance of keeping up the charade before leaving for her day — only to disappear on her way home from work. As the rest of the sisters work to find her, they find themselves mercilessly hunted down by the brutal Child Allocation Bureau —including agent Adrian Knowles (Marwan Kenzari), who becomes involved with Monday— and the sinister secrets of the C.A.B. begin to come to light.

The film was released by Netflix on August 18, 2017. You can view the trailer here