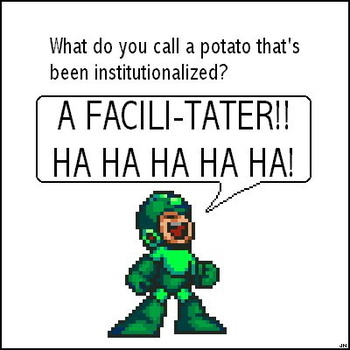 And now you are prepared.
"Sounds fun. And that's what we're all about here at Life of Wily. Pure. Stupid. Fun."
— Mega Man, summing up the strip's general philosophy
Advertisement:

Life of Wily was a Sprite Comic that ran from 2001 to 2003, immediately following in Bob and George's wake. The comic's primary distinction from its many-at-the-time competitors is the addition of one Original Character: Megatug, a Naïve Newcomer created to replace Mega Man when the latter was presumed dead, who resembles him in almost every way aside from being green and having Auto's boots.

The comic remained online for a considerable amount of time after its cancellation (ended in 2003, remained online until late 2019), but is now fully available through the Internet Archive

. Bear in mind that you'll have to sometimes switch to a different snapshot to see some of the strips.