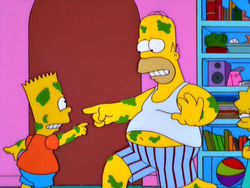 The Simpsons are forced to go to a ski resort to make use of the skis they bought, but never used. While Homer gets hit in the groin by moguls after being distracted by the mental image of Flanders' butt in a skintight ski suit and Lisa nearly gets attacked by deer, Marge ends up the one being injured when a cuckoo clock falls on her leg. While Marge is laid up in the hospital, Lisa steps in as her replacement — and realizes that it's a lot of work in cleaning up after the slovenly Homer and Bart.