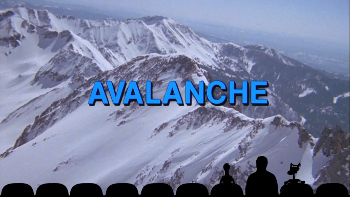 "Spoiler! Geez."
Kinga Forrester: Your experiment today is Avalanche, a disaster film in a very literal sense. Prepare to be buried under a mountain of bad acting and failed romantic chemistry.
Advertisement:

Tropes Used In This Episode:

A police car wrecks and crashes into a store, knocking a person through the window.