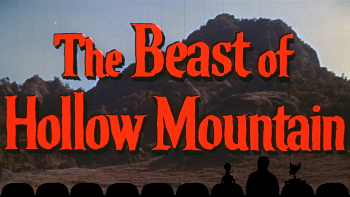 "So, are all these mountains hollow, or are we gonna have to guess which one?"
Kinga Forrester: Speaking of unspeakable pain, your movie today is part western, part monster movie, and all bad.

The beast grabs the wooden pole from Sarita and breaks it.