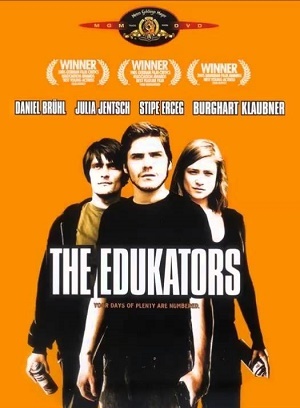 The Edukators (German: Die fetten Jahre sind vorbei, meaning The years of plenty are over) is a 2004 German-Austrian film made by the Austrian director Hans Weingartner. It stars Daniel Brühl, Julia Jentsch, Stippe Erceg and Burghart Klaubner.

The plot centers around a group of student radicals who break into rich people's houses, rearrange the furniture, and leave notes saying "You have too much money. The Edukators." Things go wrong, however, when they break into the house of a man whom one of them knows, who happens to be home and recognizes her. They end up taking him hostage, and the events spiral down from there.