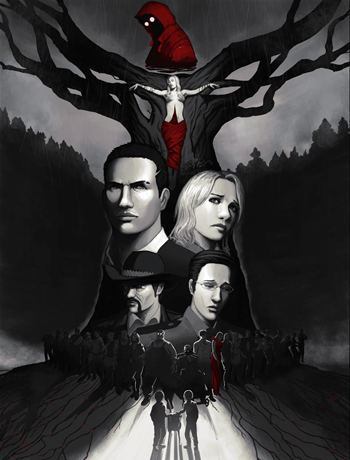 used for the Director's Cut.
"At times we must purge things from this world, because they should not exist. Even if it means losing someone that you love."
Advertisement:

Just your typical unassuming small American town. Certainly not the kind of place you'd expect to find the mutilated body of a young girl, stripped and bound to a tree as if crucified, left to be found by two young boys.

Francis York Morgan (just call him York, that's what everyone calls him) is an agent of the FBI with a special interest in murder cases involving young women. He works alone, save for the company of his invisible friend and confidant Zach (don't ask). Neither of them have seen anything quite like the events unfolding in Greenvale, and all of the horrendously-mutated monsters are a bit of a warning sign too.

But even the best agent can't deduce anything without information, so York sets to work gathering clues and profiling the eclectic residents of Greenvale, any of whom may be the culprit behind the "Red Seed Murders". But as the bodies pile up, and York comes closer and closer to the truth, he begins to discover that the murders aren't as normal as they seem...

That's the basic gist of it. What that doesn't cover is the town's incredibly quirky citizens, and the mostly funny, always weird situations York finds himself in.

Definitely does not resemble (or infringe upon the creative property of) Twin Peaks.

Deadly Premonition is a game by Access Games, written and directed by Swery65, originally for the Xbox 360 (and PlayStation 3 in Japan, called Red Seeds Profile) released in 2010. An Updated Re-release "Deadly Premonition: The Directors Cut" for the PlayStation 3 (in all regions) was released in 2013, with Multiple Endings and other bonuses. It received a PC port via Steam later in 2013.

A Nintendo Switch port was released in 2019 (under the name "Deadly Premonition: Origins"), alongside the announcement of a sequel titled Deadly Premonition 2: A Blessing In Disguise, which sees Swery returning as writer and director.

"Well. That was one heck of a trope list. But we can always keep going on our Wiki Walk, right Zach?"